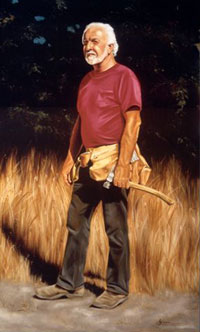 A few words about my late husband......
A friend described my husband, Don, as his hero. He certainly loved life and lived it to its fullest! We all would have bet that he would have died while bungee jumping, hang gliding, scuba diving, skiing in Europe, motorcycle riding in South America or flying his experimental jet airplane. God had other plans. Don died of a rare brain disease that affects one in a million people in the United States each year. If you'd like to read more about CJD and how it affected Don personally, I've included a well-written article by Peggy Townsend printed in the Santa Cruz Sentinel. Also, I picked up the Aspen Times which had an article succinctly outlining the differences between Don's classic version of CJD and the Mad Cow's Disease which is in the same family but the variant form of CJD.

Health & Happiness to You and Yours... Judy Brose

Since the latest mad cow disease scare hit the headlines, the calls have been coming in to the Creutzfeldt-Jakob Disease Foundation: My loved one dies of CJD, people say. Could it have been something he ate?

The news is full of concern that people can develop the brain disease by eating food products from cattle with mad cow disease.

But thats not what causes most cases of CJD.

Only about 150 cases of the human disease linked to mad cow, known as variant CJF, have been counted worldwide since it was first formally described in 1996. ( The vast majority of those cases are in the United Kingdom.) But every year, about 250 people in the United States alone are diagnosed with classic CJD, a disease known for 80 years.

Though both forms of CJD are rare and always fatal, they do differ in several ways: in the age of their victims, the speed in which they kill, and the initial symptoms.

The cause of classic CJD is unknown 85 percent of the time. The remaining cases are either caused by inheriting a genetic mutation or acquired through medical procedures that used contaminated equipment or tissues.

Florence Kranitz, executive director of the CJD foundation, said she tells inquiring families that CJD in older people is generally not linked to mad cow disease. In fact, the age difference between classic and variant CJD is striking, said Dr. Ermian Selay, a medical epidemiologist at the Centers for Disease Control and Prevention.

The classic version typically strikes people in their 60s and 70s; half the patients dies by age 68, he said. The variant kind is a young persons disease, with half its victims dying by age 28.

Symptoms also tend to play out differently in the two kinds of disease. In variant CJD, the early symptoms tend to be mostly psychiatric problems, like depression, withdrawal and anxiety, and patients often complain of pain or numbness or pins-and-needles sensation. In classic CJD, early symptoms are usually neurological, like trouble standing or walking properly, involuntary jerking and speech abnormalities, along with an erosion of mental abilities.

 Its a dreadful disease, in part because one can see the loss of mental abilities almost from day to day.
Dr. Richard Johnson - Johns Hopkins University School of Medicine

Eventually, patients become unable to move or speak and they typically enter a coma before death.

One other difference is that classic CJD kills much faster. The variant form takes about 14 months from the first symptoms to kill half its victims. The classic form takes just six months, and it kills about 90 percent within a year.

Its a dreadful disease< in part because one can see the loss of mental abilities almost from day to day, said dr. Richard Johnson of the Johns Hopkins University School of Medicine.

Johnson recalled an acquaintance with the disease. One Sunday, the man noticed his tennis backhand was off. Within weeks, he was having trouble doing his work. A few weeks later, he could not remember his childrens names. A few weeks after that, he could no longer recognize his wife.

The fast course of classic CJD makes it stand out from Alzheimers disease and other disorders, and it can usually be diagnosed from its symptoms and lab tests while the patient is living, Johnson said. If necessary, examination of brain tissue from a biopsy or autopsy can provide a definitive diagnosis, by revealing a characteristic sponge-like appearance under a microscope.

Federal health officials say about half of Americans who die from CJD are autopsied, and increasing that rate could help research into the disease. Autopsy findings can also distinguish between variant CJD and the classic form.

But last year, California scientists reported that mice exposed to prions did accumulate them in muscle. They called for major efforts to look for prions in muscle of infected livestock.